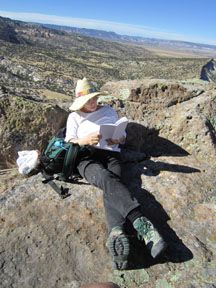 A Juicy Bone, from Lizard's Kill

Anza leaned his chair back then, scrutinizing me almost as though he hadn’t looked at me before.

“Nando, when are you going to stop dressing like a renegade Ute? You’re part owner of a ranch larger than any that exists in Spain. You come from one of the foremost families in New Mexico, yet you still look like a slave. For the love of Christ, get yourself a decent coat at least.”

With that Anza pushed a bag of money across his desk.

“Here’s part of the bonus I promised you, and money for your return trip. Deliver the map to Santa Fe and there’s more. There’s enough silver in here to get you home in style, by which I mean the clothes a proper hacienda owner would wear.”

I felt my brown face redden. I put my fingers on the edge of the desk, but reached no farther. Anza shoved the bag into my hand. “Take the damn thing, will you. It’s your turn now. It’s people like you who are going to make this country all that it’s supposed to be. Forget you’re a half-breed. There’s scarcely a full-blooded Spaniard left on this continent any more, and you know why? They can’t cut it. Blue blood has always been too thin for this territory. Men like you will prosper. Take your place, Nando.”

He must have seen confusion on my face, so he added, “That’s an order.”

I slid the bag inside my stained, homemade shirt.

“Thank you sir,” I mumbled, then looked up, and said, “Yes sir, I will make an effort to reform.”

Anza laughed, I laughed, and he tipped his chair legs back onto the floor. “Now that’s settled, back to the map. If it becomes lost later on during your journey, get word to me however you can. There’s enough money here for that. And now, if you could try to describe where the package is hidden . . . just in case.”

But I was listening to more than the governor. I was listening to the gate opening into the courtyard I’d just walked through. The hinges had been oiled and were silent, but a pile of dry leaf litter was being pushed as the gate swung inward. I was listening to something brushing against the wall at my back, the one the governor was facing. The small window had no glass in it, only crisscrossed oak bars. Our conversation was no longer private, but I was certain the interloper had only just arrived.

Since my back was to the window, my hands couldn’t be seen by anyone peering in. I made a small cutting gesture the governor could see, bobbed my head back toward the window, then leaned toward my right boot and the knife that was in it. Anza’s eyes betrayed nothing, but his hand went under his desk, presumably to grasp a weapon of his own.

He dipped his chin a fraction in assent and I whirled out of the chair, blew threw the door and flung myself at the person crouching there. I struck him in the crotch with a knee that made someone male groan and reel backwards. Whoever I’d hit slammed his elbow into my chin, jarring my teeth. Anza, filling the door to the small dark courtyard, fired his pistol into the air.

“Guard!” he shouted. I jammed the garden gate shut to hold the man inside and was leaning on it hard. Two soldiers burst into Anza’s office, guns at the ready. My former governor pointed into the small, dark courtyard where the trespasser and I panted—me pushing on the gate to hold it shut and the other man clutching his privates, hunched against the wall. The guards raced toward me.

“Not the short one. That man by the wall there!”

But ‘that man’ had gotten a leg up on a water barrel’s edge and was heaving the rest of himself over the wall. I lurched out of the guards’ way and yanked open the gate. All of us ran into the pitch black of the larger court. I heard cursing and thumping as the soldiers overturned caskets and pushed apart piles of supplies. There were yells as more guards ran into the interior plaza of the presidio, but the intruder had gone.

Anza strode out of his private yard long enough to grab me by the shoulder.

“Did he see you? Do you think he saw who you are?”

“I doubt he saw much. He was too busy smashing my face to look at it.”

The governor’s hand was on my back, propelling me through the main door of the office. “Go that way. All the men searching are out in the yard. Second door on the right. That’s our apartment. Wear my hat so Ana doesn’t shoot you at first sight.”

He dropped his heavy blue hat onto my head and gave me a shove. “If I don’t get back there in a minute tell Ana to clean you up and see you safely out of here.”

That was our formal leave-taking. I would never be alone with my governor again.